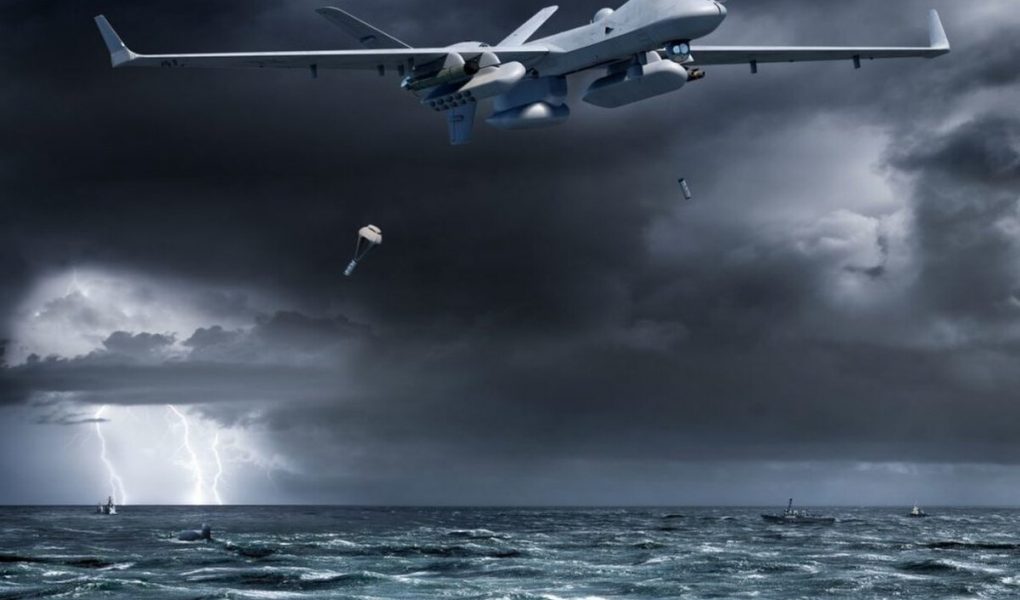 General Atomics MQ-9B is in development for maritime use. A modified MQ-9A was recently used in an anti-submarine warfare demonstration. (A rendering of the MQ-9B from General Atomics)

The United States is stepping up unmanned vehicle operations in the Middle East maritime environment amidst continued escalation from Iran. On September 8, the U.S. Fifth Fleet, based in Bahrain, announced a new initiative, Task Force 59, “to put more (unmanned) systems out in the maritime domain above, on and below the sea,” according to Fifth Fleet commander Vice Admiral Brad Cooper. This new unmanned fleet enhances U.S. capabilities against Iran at lower costs and risks. In close cooperation with its regional partners, TF-59 can signal to Iran that its continued aggression will face a strong response. The first of its kind naval group could also serve as a model for conducting unmanned operations beyond Middle Eastern waters.

TF-59’s mission is to improve maritime domain awareness and deterrence. Instead of the Navy’s typical deployment of destroyers and cruisers, TF- 59 will have unmanned platforms, such as the unmanned surface vehicles Sea Hunter and Seahawk, the MQ-9B Sea Guardian, and the MQ-8B Fire Scout autonomous helicopter. Chief of Naval Operations Michael Gilday recently revealed a similar Navy-wide effort. U.S. fleets currently operate unmanned vehicles, but this new initiative would provide the Fifth Fleet with a more focused and expanded capability in the critical Middle Eastern maritime environment.

The announcement of TF-59 coincides with a large escalation of Iranian hostility utilizing manned and unmanned vehicles that has yet to prompt a significant U.S. response. Recent aggression includes fast-attack watercraft harassing U.S. Naval vessels, the illegal seizure of shipping vessels, and a substantial increase in unmanned attacks from Iran and its proxies during 2021. Iranian unmanned systems attacked the USS Mason offshore of Yemen in 2016, critical Saudi Aramco oil facilities in 2019 and, more recently, the MT Mercer Street off the coast of Oman.

Iran’s maritime attacks indicate that its leadership believes the maritime domain is an ideal location to retaliate for Israel’s interdiction of weapons proliferation in Syria and Lebanon. Iranian unmanned attacks also enable Tehran to pressure the United States and its partners with largely deniable and indirect action. Iran is likely to retaliate against any increase in U.S. unmanned operations by harassing or attacking American, coalition, and commercial vessels and is likely to continue escalating until it faces a strong military response.

The U.S. Fifth Fleet and the rest of U.S. Central Command must respond to Iranian-backed attacks with a stronger, more persistent, and better integrated military force that prevents and deters further aggression. TF-59 will add emphasis to this effort by attracting increased surveillance and attack assets and deterring Iranian willingness to engage in hostilities.

By increasing the Fifth Fleet’s unmanned operations in the Middle East, TF-59 will realize more persistent and capable intelligence coverage, and more capacity to deter, detect, prevent, and respond to Iranian maritime aggression than conventional manned platforms currently produce. Incorporating surveillance and attack unmanned platforms above, on and under the sea into a sensor network will provide earlier warning of Iranian intentions and attacks, further enabling a secure maritime environment throughout the region. The persistence of unmanned vehicles serves as a force multiplier at a time when America needs to repurpose manned ships and aircraft in support of emerging national security objectives elsewhere.

Standing up a Fifth Fleet task force for unmanned vehicles is a significant first step in integrating the emerging fleet of autonomous capability the U.S. Navy is developing because it brings focus to the opportunities of the effort. Once sufficient assets are in the theater, it seems reasonable that the unmanned or optionally manned vehicles will become part of the traditional task forces currently filled with manned vessels. Unmanned craft will work alongside manned counterparts to perform missions such as mine clearance, maritime security, surveillance, and anti-submarine warfare. TF-59 provides the demand signal for unmanned systems that should eventually mature into platforms for specific tasks.

Since U.S. action alone is unlikely to provide deterrence or protection across the entire Middle East, the United States must collaborate with its regional partners and push for the interoperability of their systems. U.S. unmanned operations could assist Israel’s efforts to interdict Iranian weapons proliferation by providing intelligence, surveillance, and reconnaissance support or through coordinated strikes. Additionally, TF-59 should conduct joint unmanned exercises with Israel and Arab partners that include operating unmanned systems within proximity to other U.S., partner, and commercial vessels.

Task Force 59 provides a greater capability to combat Iran’s rampant maritime aggression at minimal risk to U.S. service members. However, standing up this new unmanned fleet will not be enough. America’s civilian and military leadership must leverage these unmanned capabilities consistently, or Iran’s aggression at sea will continue.

Retired Vice Adm. John W. Miller served as commander of the US Navy’s 5th Fleet and was a participant in the Jewish Institute for National Security of America’s (JINSA) 2018 Generals and Admirals Program. Ari Cicurel is a senior policy analyst at JINSA.